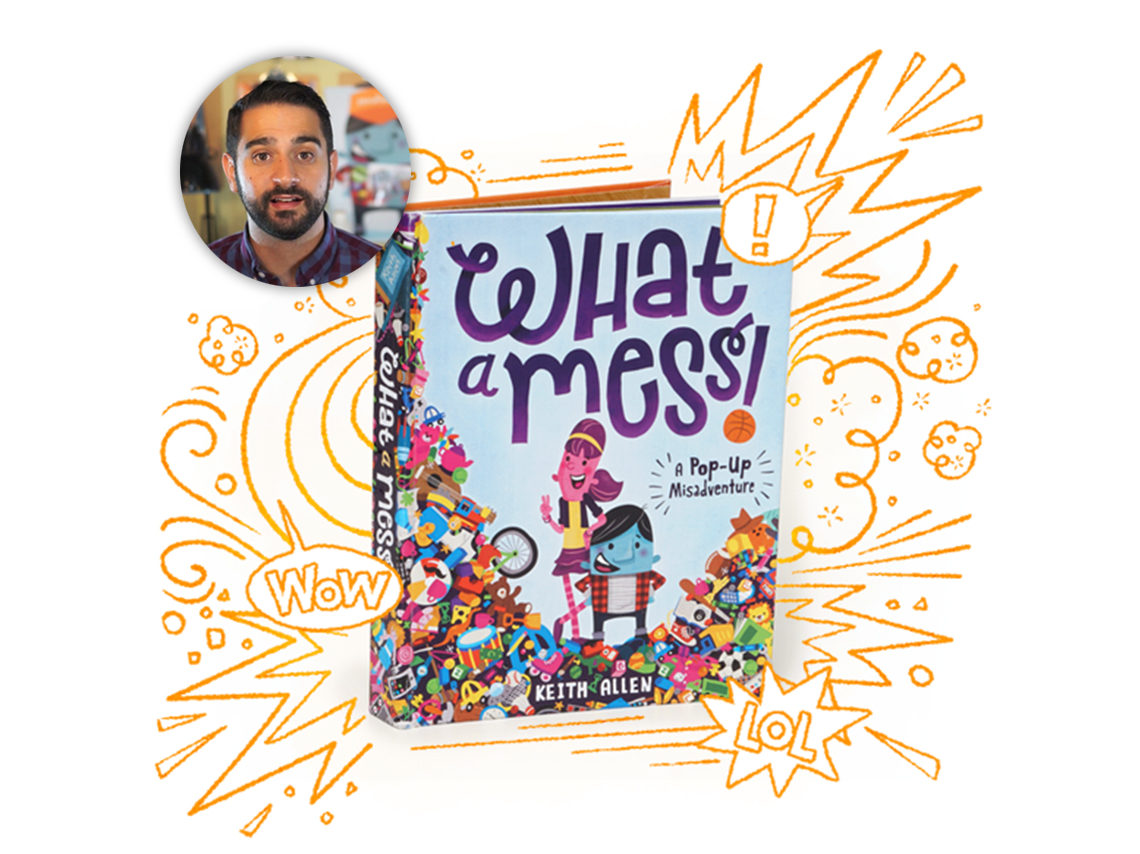 The more I write for this blog and the more people I meet, the more inspired I get. When I began building my Instagram following for dadsigner specifically I started to follow other illustrators and children’s book accounts. One of those accounts was Keith Allen’s 5am_popup. He is a pop-up book illustrator who has turned his children’s misadventures into stories for the beautiful art form of pop-up books.

It wasn’t until I got closer to my own book launch on Kickstarter that I realized he and I would be launching the same week! What I love about the internet is that it has the power to bring good people together. And Keith is good people. Rather than feel like we are competing to fund our campaigns we have supported each other. I know that it will bring me great joy to see his campaign hit 100% funding and I know it will!

In the course of chatting I decided to interview Keith and share that with you all so you can get a little dadsigner behind the scenes into his process and art. So once you get back from supporting the What A Mess! Pop Up Misadventure book on Kickstarter, scroll down to read the interview.

Sure thing. It is always a battle to get my kids to clean up anything! This inspired me to create this funny story about two children who embark on a wild misadventure after their messy room gets WAY out of control. I wanted to take this mundane chore and turn it into something fun that would encourage kids to take personal responsibility. The story follows two siblings on a misadventure of epic proportions after their messy room becomes so out-of-control that it explodes from their doorway, sends them to the top of a toy mountain, spins them around in a dust-nado, and much more.

Ha! Good question. There are a lot of ‘KABOOM’s and ‘WOOSH’s. If you practice by making over-exaggerated sounds while doing simple tasks throughout the day, I’m sure you’ll be ready to go.

When it comes to the typography in the book how was the typesetting done? Hand drawn? A font?

For legibility, the story text is a simple san-serif font, but all other type is hand drawn and then digitally illustrated. It always bothers me as a designer when typography does not match the illustration style. Plus I love to draw text. I have just as much fun with letters as I do with characters.

What kind of book is being produced?

It’s a hardback book with 7 large pop-up spreads. Each page also has a mini-popup page accompanied by the story text.
I love challenging myself with paper, and the idea of having this enormous mess literally rise out from the pages sounded thrilling to me! I wanted this book to feel like its cover was the only thing holding the chaos and silliness inside.

What kind of paper and printing method is being used?

Pop-up books require a specialized manufacturer that is both skilled and dedicated to producing movable books. I had to learn this lesson the hard way after the first edition of my first self-published book, A Day in Rehoboth Beach was constructed poorly. For the second printing of that book, an industry professional referred me to an outstanding manufacturer that produces Pop-up books for many large publishing houses.

Don’t be afraid to follow your passion and go for it! I began this project with no other expectation other than wanting to make the best book I could. I knew that if the book was strong enough, I would figure out the publishing end of it later. It was that passion that kept me interested in the project from start to finish. If you have an idea but you don’t love it, keep writing and sketching… it’s only those ideas that you fall in love with that will keep you motivated through the difficult times.

When the Kickstarter funds, will you have additional copies that you’ll try to sell? If so where/how?

That’s the hope. Kickstarter is really just a wash – all the money I collect will go to manufacturing and I’m not compensated at all for my time or work. The hope is that I will have remaining copies that I can then sell through my own website, Amazon and local bookstores.

Thanks to Keith for sharing! I can’t wait to see this book come to life.