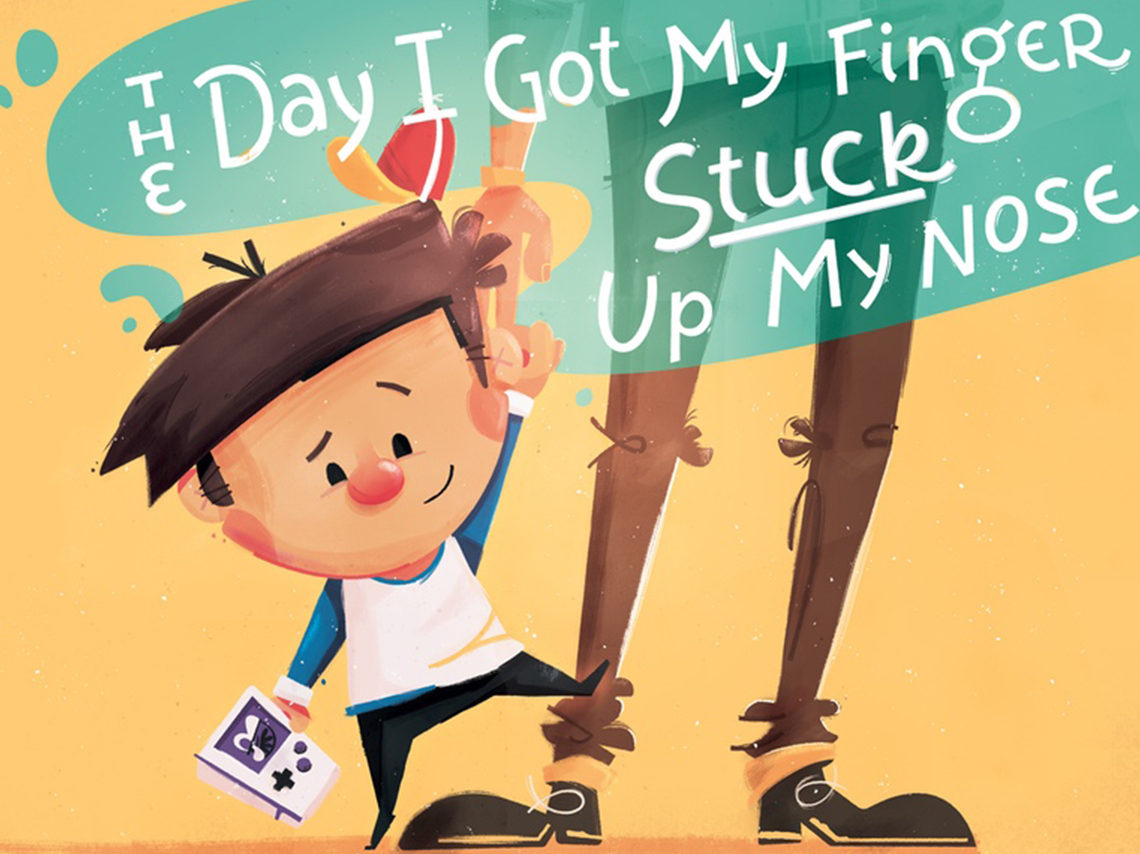 I am super excited to feature another interview with a children’s book author. It has been a huge inspiration for me to see how other people are approaching their books and making them a reality. The cool thing about this book is that it has yet to release and you can play a part in making that happen. That’s right Brian needs your help to make this a reality. Currently the book is available on kickstarter. I’ve already backed it and I really want my copy so you should go back it to.

The title of the book is The Day I Got My Finger Stuck Up My Nose by author Brian Walsh. I had the privilege of interviewing Brian to get the scoop on what this book is about. So if you are on the fence about supporting this then read to the end and I bet you’ll want to then. Onward to the interview…

The Day I Got My Finger Stuck Up My Nose is a story about a boy who loves to pick his nose. He often ignores his mother’s advice not to pick it, for fear of the consequences of getting it stuck. One day he was picking his nose during church, where you probably should never pick it, and his mom hits his arm to stop him. When Wyley decides to remove his finger he then realizes that his finger has become stuck. While wrestling with his finger his mother sees him and panic settles in. We then follow the family’s journey to resolve the issue at hand. (Pun totally intended)

How did you come up with it?

When I was in middle school a teacher asked the class to write a children’s book that had a theme. We would then take these books and go to another school to read it to a second grade class. I knew I wanted to make everyone laugh, but also challenge them to learn a few new words. So I wrote The Day I Got My Finger Stuck Up My Nose. No, this isn’t something that actually happened to me, but there were a few close calls.

The original book was written all by myself and illustrated by a talented friend named, Susan Kelly. When we finished the book and read it to the class everyone loved it. My teacher even asked me if I wanted to try and get it published. Obviously I was too preoccupied thinking about what I was going to do at recess than think about anything else, so my book sat on my bookshelf collecting dust.

Occasionally I would come across it in my room and think about what my teacher said. With every year that passed I became more and more proud of what I had created and hoped that maybe I would get up the courage to get it published. The Day I Got My Finger Stuck Up My Nose has traveled to and from college and moved from one state to another. I’ve carried it around all these years and read it to whomever would listen.

Finally I decided to go for it since my son was born and I wanted to share it with him. Who is the illustrator?

So I searched for an illustrator to help make my dreams come true. There are a lot of great ones out there, but it’s important to find the one that their style just feels write to you. I stumbled across an amazing illustrator by the name of Kirk Wallace on dribbble. When I reached out to him he said that a children’s book was one of his dream projects. As if the powers at be decided that our dreams should intertwine we began working together on character design and storyboarding page layout.

Staying true to a style that is completely his own, Kirk is inspired artistically by the world of magic and memories in classic Little Golden Books, Looney Tunes, Disney films, mid century advertising etc. We hope together that parents can read our story to their children and bring them back to these wonderful memories we all share together.

When it comes to the typography in the book is Kirk doing that or are you doing the typesetting?

Kirk is doing it. He did a lot of research and I passed along a few articles that I found as well. A lot of the literature on typesetting points to a serif for easier reading comprehension. We created a styleguide/branding guide for Wyley and the book which we will release at some point of the campaign.

What style of book is being produced?

At the moment it is a glossy, soft cover book. It is similar to the Bernstein Bears books that I grew up on.

There should be 2 voices at the ready. One is used a lot more often, but I sprinkle in some other “effects” to my voice to match the current page’s theme.

Test a rough version and read it aloud a lot. I was fortunate enough to have a whole classroom of honest kids to tell me how they felt about it, but you could probably just ask friends and family that have kids.

So there you have it, another duo following their dreams to make something really awesome. As a side note all of the images in this post are shared with permission from Brian and are a sampling of what you’ll see in the book!

Now please do me and Brian a favor and go back the kistarter here.